Rick and Buck practicing some exercises

Outside of visiting my adorable and way above average granddaughters in Virginia, the opportunity to chat with Rick Smith made my 1000-mile trek from the Midwest to Virginia worthwhile. After talking with Sonny Piekarz and Ronnie Smith, who quoted Rick frequently, I felt honored that Rick would carve out a few hours for me to visit him at his Crozier Virginia home.

As I drove to his home perched on a hilltop surrounded by manicured horse pastures, I felt like I was stepping back in time. Piled rock walls, antebellum columned homes and horses romping in green fields, brought a quiet to my soul.  I was coming to the old south where time is slower, talk is genteel and civil, and history is remembered. Rick’s picturesque yellow ranch style home fits on the landscape- a great horse property with a U-shaped yellow ranch home sitting proudly on top of a hill. It had stalls on one half and the other half for human occupants.  A copse of hardwoods to the north side of the home protected the kennels where several of Rick’s famous American Brittany’s lived.

Rick lived on the hills near the James River in a neighborhood where lots of American History happened.  To get to his home, I drove across Lee’s Crossing, named because the famous confederate General would pass there on the way to his brother’s home.  The first elected Governor of Virginia, James Pleasants, owned the plantation which dominated the area during colonial history. Rick’s home overlooked Governor Pleasants original homesite.

Rick graciously welcomed me to his office and Tex and Chaco were allowed to explore the premises.  My dogs were in heaven with squirrels to chase in the woods and horse apples to taste.  It felt like a test—did I have well trained enough dogs to let them roam? My dogs passed.

An old photo of Rick I found on-line with his brother Tom and a grand champion Brit.

Rick’s background is unparalleled in the bird dog training world; a third-generation bird dog trainer, trained Amateur and Open field trail champions, 50 years as a professional dog trainer, a world-renowned bird dog seminar instructor for over 20 years with his cousin Ronnie through The Rick and Ronnie Smith Dog Training Seminars.He has a column in The Pointing Dog Journal with fellow Virginia trainer, Sharon Potter. At 70 years old I could tell in just a few moments of conversation that this was a man comfortable in his skin, expert in his profession and happy to share his lifetime of knowledge. He does almost 30 seminars a year and loves teaching people and animals.

Sharon Potter and Rick write a column together for Pointing Dog magazine.

“I feed off of being with people. I want to be helpful with my life and I enjoy teaching.  I am a professional handler of dogs, but my seminars connect me with people who share my values and passions. I really enjoy meeting the people who attend these seminars. I will keep doing this as long as I can.”  His enthusiasm for dogs and the sport of hunting was evident.  Like a great teacher, he keeps adapting his training to fit modern dogs and to solve the problems we face

His comments reflected the challenges I heard from other trainers that too often people do not give their dogs what they need to be happy.  “Dogs need structure, they need a leader.  They are wired as pack animals with the need to be led.  If we don’t provide it, they will take over.  Quoting cousin Ronnie, he said, “If you treat your dog like a human, your dog will treat you like a dog.”

Rick explained further, “Dogs are happiest with a job and a leader.  I teach people how to do this with their hunting animals, but it is an uphill battle since mostly these days, I help train pets that people take hunting. People are not always willing to take charge of the relationship.”

He told me a great story that illustrated this.  He was at a professional workshop with detection dogs, trained dogs used to find bombs, drugs and support our military and police forces in protecting people. They brought him a dog that was a capable detection dog, but he ate rocks obsessively, in fact he ate every rock he came near. “When they showed me this dog, I was not going to give my input until asked but when they asked what we would do, I put the dog on a “Wonder Lead” and in 5 minutes cued him not to eat rocks and he was cured.  The trainers there were unwilling to create enough structure, so the dog did crazy things.”

Rick is a self-described dyslexic and I am self-diagnosed with ADHD so after an hour of conversation, we went out to work his young lab.  It was fun to see a master at work.  The lab, an exuberant happy bloke, Buck, shook with joy and nuclear energy when Rick approached.  But Buck was a gentleman and did not release until commanded and then ran with the abandon and joy of this breed. Buck and Rick worked through some agility and training processes and I am happy to report that Rick’s dog was not perfect, and several times did the opposite of what Rick commanded by eating horse apples and running off to the woods to explore on his own while we were training.  It made me feel good that even “The Dean” Rick Smith’s dogs had challenges and were not perfect.

Rick explained that too many people tap dance around their dogs.  They fear breaking the dog’s spirit and often end up indulging bad behavior and a dog who won’t work.  “Dogs, like people, have free will,” he philosophized.  “I have certainly received a ‘collar jerk’ from God many times. If God does it to us, our trained animals need it as well.”  His simple logic had great force.  Reprimanding and correction are part of all teaching, parenting and dog training.  I recently read an electronic post where someone made the argument that using any physical force with a dog builds a barrier between man and animal.

My experience is the exact opposite. I use physical correction and my dogs treat me with loving affection and respect, folks who refuse to correct with anything, but verbal commands very often escalate into yelling. Most of the time they have no control of their animals at their own risk as they dash out of doors into traffic, must be on a leash in public because they jump on people and cause their owners great worry and alarm. Every trainer I met struggled with this “afraid to correct because it will break their spirit” attitude but said the repair was simply having the dog’s owner take leadership which means simple physical direction and cues with devices like the wonder lead and eventually an e-collar.  Rick summed it up simply, “a human taking leadership with a dog, is natural for them and creates a healthy partnership.”

I had one loaded question for Rick about the best breed of bird dogs.  He answered with the voice of experience, “the best dog fits the climate and terrain, I like Setters and Brittany’s for hunting in the Midwest but for really big country hunting Texas quail or Oregon Huns and Chukars, I like a big running Pointer or German Shorthair. There are no hard and fast rules, but a good dog can usually hunt lots of cover.”  I certainly saw that to be true in my travels.  My French Brittany’s loved hunting big in the open areas of the Snake River and learned to tighten up in the heavy cover for Southern Minnesota Pheasant swamp bottoms. 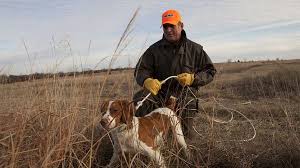 Rick working with one of his famous American Brittanies

My time with Rick was an absolute delight for me.  What I connected with most was watching Rick with his young lab.  Here was a man in his element, I thought, a man who was living out his calling.  Although his office was full of family photos, awards, photos of him with national leaders like former US Presidents and Senators, but he was not really at home there.   Looking at the smile on his face while he works with Buck, as well as a happy chortle under his breath, this was the face of a content man.